It’s difficult to know where to start with the first Tour weekend of the 2022 season, as there was just so much happening, with around 250 players heading to Coventry for the European Championships. The Main Event was the Professional tournament, with the Open, Ladies and Amateur events all taking place as well, ensuring a very busy three days of action.

We got underway on Friday with the Professional event with the new raft of professionals who had qualified from the amateur ranks in 2021 making their debuts, and there were some notable performances from the likes of Andy Croasdale, Michael Tomlinson, Wade Morley and Ben George who all got off to decent starts. 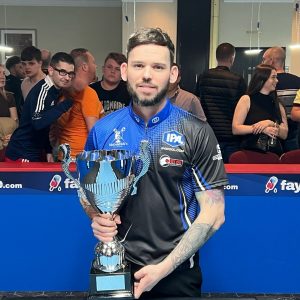 It was also fantastic for everyone to see the return of Mark Boyle, one of the most popular players on the circuit, who has had to overcome some terrible recent personal events. His run in the pro event was short lived though as he succumbed, as many have recently, to the new World Champion Liam Dunster, who continued his fine form and duly took his place in the Saturday showpiece final.
He would be joined by a rejuvenated Clint I’Anson, who had to overcome two of the form players in the World right now in Gareth Hibbott and Marc Farnsworth, in the quarters and semi respectively, and he was clearly in great form to take those notable scalps.

A jam-packed room which was standing room only, witnessed yet another IPA classic final. Liam started the stronger and the writing looked to be on the wall, but Clint dug deep, upped his standard, and coupled with a few errors from his opponent, finally got over the line 8-5 to take the title of Fayre.com European Professional winner. A welcome return to the winners’ circle for the ever popular I’Anson, and he now has to be considered as a serious contender in every event after the standard of pool he delivered.

After a late finish on Saturday, it was back to the final stages of the remaining four events on the Sunday.
The main attraction was the Open, and there were some notable performances from the amateurs along the way against their more illustrious professional opponents, including fine runs from Kevin Kirkham and Wayne Camm, who disposed of Gareth Hibbott in the last 128. Indeed, the previous night’s Professional winner Clint I’Anson was also dumped out of the competition in the Last 128 by another highly rated amateur player in Matty Rowland.
Whilst the pro event semi-finals featured the Top Four seeds, none of those four made it to the Open semi-finals, once again emphasising the strength in depth of the IPA and the unpredictability of the sport. Dean Shields, looking for his first major IPA title, and Mark Boyle, were the pair who made it to the final, both after nail biting deciding frame victories against Ryan Clark and Ben Davies respectively.
The final didn’t quite go to plan for Shields, as a few errors and some bad luck enabled the returning Boyle to secure another IPA title, and he had us all welling up with his victory speech, and his success will surely go down as the most popular victory in the history of the sport. 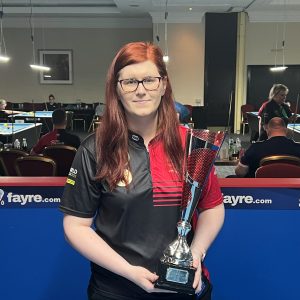 The Ladies, with their new format and the addition of the Ladies Cup (for those players who don’t make the quarter finals for the main Ladies event) proving to be a great success, and the final two consisted of Ladies Number Two Kerry Griffiths and new World Champion Harriet Haynes.
It was nip and tuck early doors as Griffiths kept up with Haynes at 2-2, however the latter stormed away to land the title with a comfortable 6-3 victory in the end, and continue with her fine run of form.
The Ladies Cup was just as keenly contested, with Number One ranked Vicki Lomax, who was unceremoniously dumped out of the main event, reaching the final, up against newcomer Jodie Allen. Although Jodie kept in touch with her more experienced opponent, it was Vicki who claimed the spoils with a 4-2 victory.

And the final final of the weekend was all about the Amateurs – almost 170 of them started out, but the final two were Joe Prince and Dave Stratford, both newcomers to the Tour and surely destined for pro status even this early on in the season. Both had played some superb pool to come through the tough field, and both put on a show for the watching audience.
As tends to be the case, the final went down to the deciding frame with both players feeling the pressure, knowing exactly what a victory would mean. In a nip and tuck last frame, it was Stratford who held his nerve to pot the winning black and take the crown, much to the delight of his fellow Welsh colleagues who had stayed to watch.

So, the tables are put away until the second instalment of the 2022 IPA Tour at Bradford on the 27th-29th May, after what can only be described as one of the best Tour events in memory. A fantastic atmosphere throughout the three days, great pool, incredible drama and a fitting end with Mark Boyle taking down the Open title.
See you in May!