An Englishman, a Scotsman, and a Welshman walk in to a pool tournament… 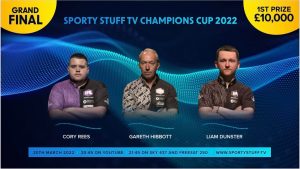 With so many of the World’s top pool players eager to pit their skills against their rivals in the SportyStuff Champions Cup, it took a few weeks of outstanding action to get to the three man final – but boy, was it worth the wait!

With a “race to four” format throughout, and a 3-3 draw a possibility, we saw absolutely everything week on week – sublime clearances, shots only the best players could even envisage, pressured misses, flukes, everything you can imagine from the fast and furious sport of pool, and all played to the official rule set of blackball.

Come Sunday night we were left with three as mentioned – and what a line-up – in alphabetical order we had World Champion and rankings number one Liam Dunster, reigning Champions Cup holder Gareth Hibbott, and up-and- coming Welsh star Cory Rees – with Liam the bookies favourite before the first cue ball was struck.

With a 3-3 draw an option, and each playing the others twice in a double round robin format, getting off to a good start was seen as imperative with points meaning prizes and a huge pot up for grabs to the winner.

Cory started proceedings against Gareth, and despite the odd nervous visit from both players (understandably in the circumstances), they fought out a 3-3 draw which would have seen Liam rubbing his hands with glee as an opportunity to get off to a flying start and lead all the way to the finish line presented itself. His first match was against Cory, but he had already met his Welsh rival twice without success, each one ending in a draw, and that run continued as the pair fought out a 3-3 draw, leaving them all pretty much where they were before the evening had started.

Gareth Hibbott and Liam Dunster have had some titanic battles in recent years including the recent World Championship final, so we were all on the edge of our seats for our next match, but with Gareth’s renowned hammer break, and Liam coming up dry far too often, we ended up with a one-sided encounter as Gareth won 4-0 and took over at the head of the betting for this event on that one match alone. Three more matches to go and Gareth was straight back on (seen by many as an advantage), but nobody told Cory who swept him aside 4-1 to keep his hopes alive as we moved on to the final stages. 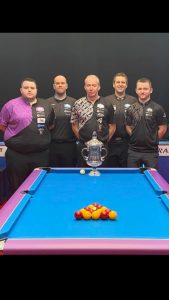 A 3-3 draw between Rees and Dunster (again)saw everyone trying to work out the various connotations as to who could or couldn’t win, before the second Hibbott/Dunster match ended in a win for Gareth by the scoreline of 4-2, but personally I still could not work out who was now the winner (though we knew it wasn’t Liam) with both Cory and Gareth level on five points. Luckily, there are rules in place for such scenarios, and the next step is frames difference – still a draw amazingly. We then go to frames won (followed by head to head results if needed), and that gave the result to Cory Rees, quite frankly a thoroughly deserving winner. Anyone who thinks otherwise needs to look at the stats for the entire tournament – 28 days of pool in total, 168 matches (44 ending in draws, which surprised me), 900 frames played – and from start to finish, Cory did not lose a single match.

So, in conclusion there were two winners here, our new Champion Cory Rees, and the sport of pool – top class action by the very best players on live TV, what’s not to like – and I for one am hoping they will be back, and pretty sharpish too! 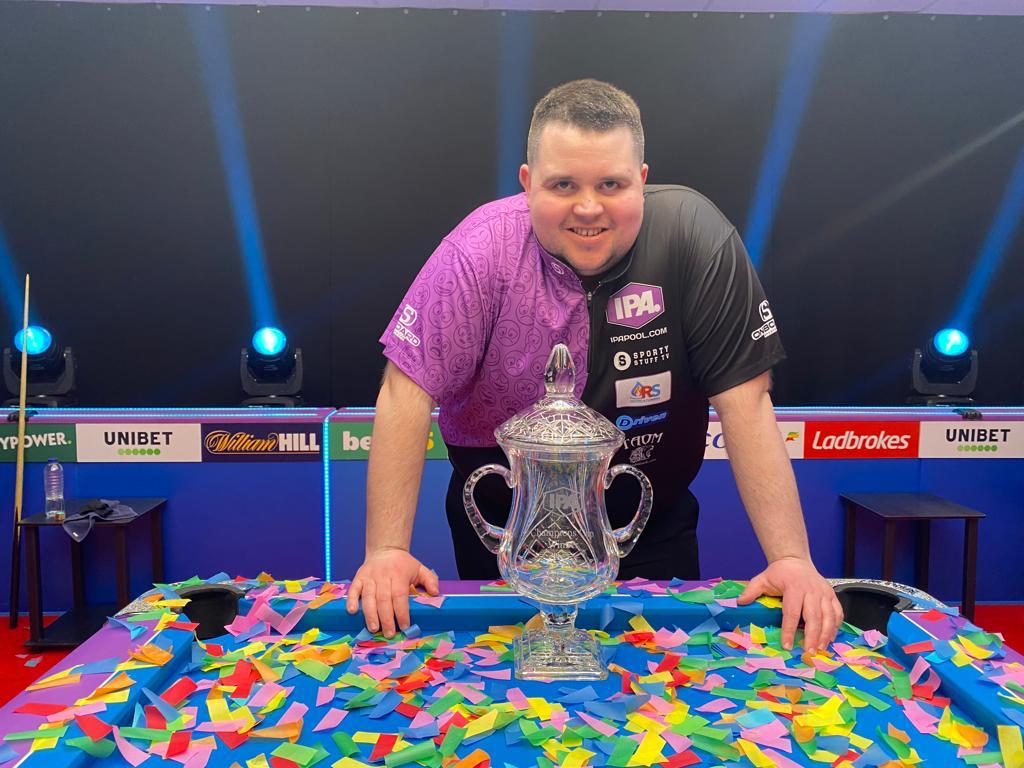