I appreciate I am here to write about all the good things on the IPA Tour (of which there are many, by the way), but I do sometimes get accused of going over the top, possibly referring to my big book of superlatives searching for new words to use.

Luckily for me, that is not the case – the players provide the excitement and the positives, and I just have to write about them, nice work if you can get it.

This weekend we changed the format around a little so that the professional players could take centre stage, which fitted in nicely with the bookmakers support from Corals, Ladbrokes, and others, another step forward on the IPA path.

On to the pool and I could write all day about the earlier matches, but I am not here as a cure for insomnia and we will sensibly start at the semi-final stage. Four top players fought it out for the chance to fight for the prize but for once we had one-sided matches as Liam Dunster beat Dean Shields 8-2, and Jon McAllister dispatched Ryan Clark by the same margin, setting up an intriguing last match of the day. As you may know, Jon McAllister is the longest reigning IPA World Champion (having won it pre-covid), and he looked back to that level again here as he stormed clear for an “all over bar the shouting” 6-2 lead, which would have seen him trading at ridiculously short odds with the bookmakers, no doubt. Whether he took his foot off the throttle, or Liam had an inspired comeback, or the pool Gods changed their favour is the big unknown, but somehow Liam got back to 7-7 in the race to eight and then went on to snatch victory at the very last second – good for his fans and backers, but not so much for Jon’s.

Given enough time for the heart to get back to normal, and we had three more finals all booked for the Sunday evening.

First up were the Amateurs (in name only in some cases, the standard is ridiculous), where Andy Croasdale took on Morgan McInnes, who was my tip for the last event and not this – thanks a lot Morgan. Yep you guessed it, Morgan came home in front by the score of seven frames to five but I have to add, this was one of the most exciting finals I can remember, I loved every minute, and if you get the chance to see it again on Youtube or elsewhere, please do – if you love pool you will not be disappointed, with both players deserving all the plaudits. 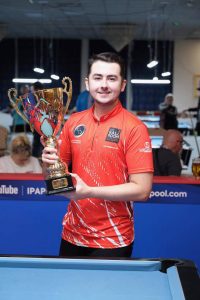 At 6.30pm or so the Ladies made their way to the streaming table and to be the best of my (limited) knowledge, we had two debut finalists with Kelly Denton taking on Danielle Randle in a race to five. With the first eight shared 4-4, it turned in to a one frame shoot out that went the way of Kelly to land what I believe to be her first ever IPA Title in her first ever IPA event – some achievement.

The fact is that the standard of the Ladies game has improved hand over fist in recent years and the quality just gets better pretty much every tournament, and this was no exception as viewers and on-site spectators were treated to a heady mix of tactics and potting power. 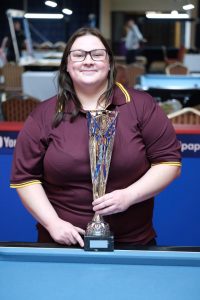 One final to go and the Open was last but not least in my book. Despite my unhidden admiration for the top amateurs, the fact is the finals of these events are invariably fought out between professionals and so it proved again here with Tom Cousins (that’s right, the Tom Cousins I tipped for the pro event, and not the Open) up against Marc Farnsworth, who was looking for his third Open event in a row. As a repeat of the 2019 World Final we knew we were in for a treat, and so it proved with Tom eventually coming through 7-5 to win his first IPA Open event after what many are already calling the greatest final of all time. It was nip and tuck throughout but the quality was there for all to see, and as it takes two if you want a competitive match, hats off to Marc Farnsworth as well for making it the titanic battle we all enjoyed so much. 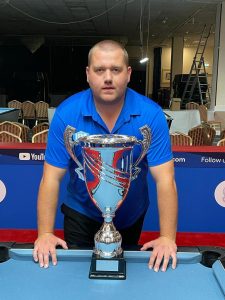 With the tables packed away and moving on to the Isle Of Man for the International events, we will be back from the 5th to the 7th of November, and this time we will be on the BBC (via the red button) as well – see you there!